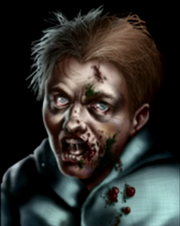 Zombies are of the "destroy the brain to kill" variety. You don't have targeting, since everyone already knows the rules and focuses on destroying the brain or incapacitating the zombie they are attacking.

In the world of Dead State, the idea of zombies may exist, but widespread saturation of the idea (in popular entertainment) does not. That is, there may have been comics or obscure novels about the dead coming back to life, but there was never any "Night of the Living Dead" type movie to make the concept popular/familiar.

The reason that people know to destroy the brain is because either it was shared with the public before TVs went dead or survivors have passed this knowledge on. And people who didn't figure out how to kill the undead probably didn't survive their encounter with them.

There are no zombie animals, track star zombies, mutant zombies, radioactive zombies, spitting zombies, zombie helicopters, lich kings, etc… They are all the slow, shuffling, stupid type. They respond to noise and sight of the living. They’re not very dangerous in small numbers, but can overwhelm in large packs. Their bites are infectious, and most people will die within three days of being bit. 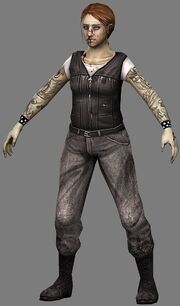 Zombies are all the same, except for if they are crawling (missing legs), on fire (because you set them on fire), or wearing armor because they died with armor/helmets on.

All zombies have the same stats, regardless of whether they just died or not. Zombies do have other advantages - they don't bleed, they don't take as much damage from firearms, they don't have to breathe, and every single zombie nearby is friendly towards them.

NPCs that turn into a zombie will have their own zombie model. However if you leave the map, it is assumed they wander off and they will not be there if you come back.

When you’re facing the undead in combat the following information will help you understand their limitations and strengths, and hopefully keep your allies or you from getting bit.

Zombies prioritize movement by sight than noise. As long as they can see a human, they will go after them. Zombies are attracted to the loudest sounds or the sounds that are within their hearing range. Once they find a live target, they will try to follow it.