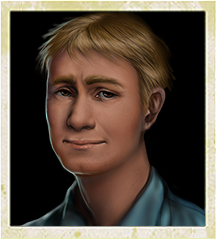 Todd Kantell is a television preacher from Dallas who escaped from the city with Priscilla Butler and a fair amount of other survivors. When he arrives at the Shelter, he and Priscilla are the only ones left.

Todd and Lloyd are also the only Subleaders who won't challenge you for leadership.

Todd shows up at the Shelter gate on Day 14 together with Priscilla. Simply don't turn them away, and they will gladly join.

Todd immediately works on maxing out his Negotiation skill, then works on both Medical and Leadership skills, then works a bit on his Mechanical, Science, and Ranged skills. He gains stat points in Perception and Vigor.

Todd is not a good candidate for the world outside the Shelter walls - not only does he not have good combat skills, but his chance for Panic is rather high for both Damage and Horror. His daily Morale bonus and his very high Negotiation skill helps make him useful for odd jobs around the Shelter.