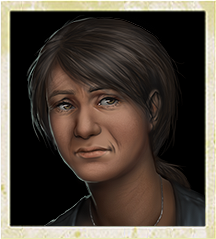 Isobel Dee was a chemistry teacher at a high school (who recently got her PhD), and while she's married, both her husband and her son are now far away in Vermont with her parents, apparently safe. She was saved by Ulysses Ford and Darlene Lumpkin from zombies, so she joined them.

Isobel is recruited together with Ulysses Ford.

In order to recruit her, show up at the first meeting with Ford, and make sure to deal with him fairly. When Ford introduces himself, ask him to come back to the Shelter. Ford will be hesitant, but if you have a Negotiation skill of 8 or above, he can be talked into considering it - at that point, continue to be peaceful ("Give us a chance" or the other Negotiation-based comments). If you do, he'll give in and bring his team - Darlene, Harold, and Isobel - along.

Isobel puts a lot of her skill points into maxing her Science skill, with Negotiation and Melee as backups - after maxing Negotiation, she'll spread her skills out into Medical and Leadership. Her stats first focus on Agility, then Strength and Vigor.

Isobel's chemistry PhD should be put to good use; build her a Science Lab, and she'll be very comfortable working there.