Armor is a type of item in Dead State. Armor is generally looted from enemies, but can also be found in containers. Armor can be improved and it can also be crafted.

Four types of armor exist. Each type can be equipped to a corresponding slot in the character inventory screen:

Shields are considered a a type of weapon and are equipped in the secondary weapon slot. They cannot be used with a two-handed weapon. 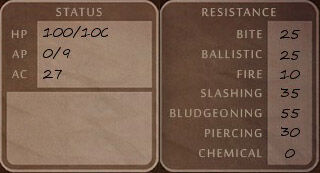 Armor Class (AC) is the defense value of all armor subtracted from any kind of damage. Specific protection values display the damage percentage absorbed from a specific source. Damage-specific protection is applied before subtracting the Armor Class from damage (in other words, AC is calculated before damage reduction). Armor can provide resistance to specific types of damage such as bites, ballistic, fire, slashing, bludgeoning, piercing, and chemical.

The following is an example of damage mitigation where Armor Class is 5 with a 10% resistance to Slashing damage. If an enemy attacks with a knife, dealing 10 points of damage, then the actual damage received would be 4:

If the 10 points of damage had been from a hammer, the resulting damage would have been 5, because a hammer doesn't inflict slash damage.

Vigor grants additional Armor Class points at rank 4 and above.